History of Rhythm and Blues,
Hip-Hop and Rap Music 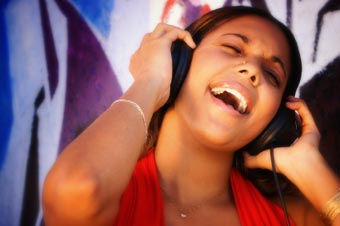 The term Rhythm and Blues was used as a synonym for Black Rock and Rollin the 1950s. This influence is evident in forms of Rock Music, Country and Western, Gospel music, Jazz and also in Non-Western forms of music.

Just prior and during World War II (1939-1945) changes took place in the US social, industrial and technology sectors causing a widespread change in American demographics where black Americans migrated from the rural South to Midwest, Northeast and West Coast cities to work for higher income.

These changes brought about the creation of new music styles such as the Rhythm and Blues to suit the changing taste of this group of people.

There were three technological developments that took place, namely the invention of electric guitars, the discovery of the German-invented tape recorder which simplified the recording process and the rise of television broadcasting in the late 1940s.

These led to radio owners to sell off their radio stations presuming that it would become obsolete because of the popularity of television. These new radio station owners sought black American musicians and this allowed the sounds of Rhythm and Blues to be aired to the ubran black audience.

In the 1960's the three most important styles of Rhythm and Blues were:

As the influence of various styles of Rhythm and Blues grew, the music transfered part of the langauge, fashion, style of dance, and attitude of the urban black into the mainstream of American culture. White participants began to make their own versions of the Rhythm and Blues music, some of which then gain widespread popularity among white youth.

Distinguishing characteristics of Rhythm and Blues are:

In the 90's the term "Christian Hip Hop" became descriptive of this type of music. The artists professes to be Christians and use their faith to spread the gospel. Many fans consider Christian Hip-Hop music to be more cool than the secular sort and are more experimental than secular Hip-Hop with more usage of acoustic and electrical guitars and other instruments that are somewhat uncommon in Hip Hop.

The first artist with a commercially released and distributed Gospel Rap cassette was Stephen Wiley. A young Christian emcee known as D-boywas killed in 1991 in Texas for taking youth from gangs and leading them to Christ. Some consider him to be the first Christian emcee martyr. dc Talk was perhaps the first wide success among Christian Hip- Hop groups.

So what is Hip-Hop?

It is a type of popular urban youth culture that associates with Rap music. This also includes the dance styles, graffiti art, and fashion. The word sprung from the disc jockeys in the 1970s in New York. In 1980sbreakdancing became a popular form of Hip-Hop dance. Today the term is used as a synonym for Rap music.

Chrisitan Hip-Hop has a history of being dismissed by churches worldwide as sacrilegious, or devil music and thus, many artists, received no money, nor support and no funded albums. Similar to contemporary Christian music, today, many see it as being on the brink of mainstream success.

Things have changed since. There has been increased church acceptance with some congregations having Hip-Hop themed worship.

Much like other forms of mainstream-style Christian music such as Christian metal and punk, it is often accepted by Youth Pastors and others, as many artists and groups such as LA Symphony create music with quality widely considered to be on par with that of secular Hip-Hop, which often attracts non-believing fans, and many times, draws such audiences to Christ.

Rap Music was developed by African-American and Hispanic in the mid 1970s. It is characterised by spoken or chanted rhyming words with a rythmic accompaniment. The musicians lingo for the word rap means "to hit".

In the 1900s the extended meaning is "to express orally". Over the decades it came to mean "to discuss or debate informally" and that meaning was established in their community by the late 1960s. It consists of chanted, street poetry accompanied by disco or funk music.

Some have critisized rap as boastful and a promotion of violence while others admire it as an inventive manipulation of cultural idioms and credit many rappers with an acute social and political awareness. Rap has been incorporated into Pop Music and often used interchangeably with Hip-Hop.

Return From History of Rhythm and Blues, Hip-Hop and Rap Music To Home